This page presents the background theory used in Fatlab. It is not meant as a detailed explanation, just an overview of the implementation details.

Fig. 1.1 shows the stress related nomenclature used. We use ranges as far as possible, except when considering mean stress corrections.

The resistance related nomenclature is shown in Fig. 1.2. We use subscript R to denote resistance. Two SN curves are shown; the dashed one is supplied by the user (

) and the solid line is the one used in calculations (

), i.e. scaled down by the partial safety factor

. The slopes of the two curves are identical, i.e.

before the knee point and

after. It is possible (but not necessary) to define also two cut-off levels for the SN curve; such that stress ranges below

will be ignored, and stress ranges above

will produce a warning and set 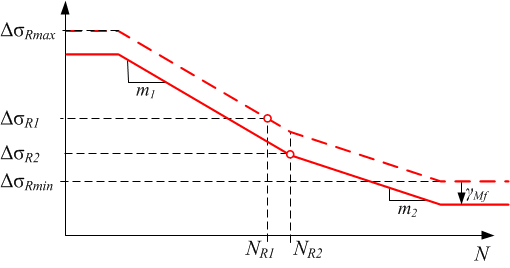 , is generated from superposition of scaled FE stresses (unit load cases) as exemplified below in Fig. 2.1. 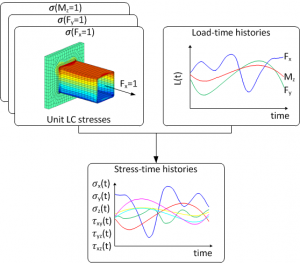 ) are scaled with the associated load-time history

The time dependent stress tensor can then be established.

The process is repeated individually for each node in the model.

The Bilinear setting is useful e.g. when modelling bearings or pinned connections, where the path of the internal forces in the structure is significantly different, depending on the direction of the load, but not the magnitude.

1D Interpolation is useful, e.g. when analyzing a model which experiences large deflections. In this case, the stresses will not depend linearly on the load, because the geometry of the structure changes during the analysis.

A an arbitrary number of FE unit load cases can be supplied and Fatlab will interpolate the stress components linearly between them on an individual basis, i.e. first

As the name suggests, 2D Interpolation is used when the stress-load relationship needs to be interpolated along two dimensions, e.g. in the case where the load changes direction and magnitude and both have a significant influence on the stress.

This setting is implemented using Matlab’s interp2, which does not support extrapolation beyond the supplied sample points. Hence, the loading must be constrained within the minimum and maximum of the supplied FE unit load cases.

The four dierent stress load relationships can be mixed and combined as required by the FE model at hand, i.e. one load component can be linear and another load can e.g. be bilinear or interpolated.

For fatigue calculations, in particular the cycle counting process, only one stress component must be selected or a fatigue effective stress must be calculated. Selecting a stress component, e.g.  is straight forward, however this is only meaningful in certain cases, where the global coordinate system is appropriately oriented in relation to the fatigue critical location.

In other cases, a fatigue effective stress can be used, such as the (signed) von Mises, principal stress or maximum shear stress, which will be explained in the following.

In case of significant multiaxiality, Fatlab offers the possibility to perform critical plane analysis. However, this is a computationally expensive process and should thus only be applied if necessary.

Two versions of the von Mises equivalent stress are available; the standard strictly positive and the so-called signed von Mises, which can take negative values.

The first is generally a poor choice for fatigue assessment because the range calculated from the strictly positive history of the von Mises stress does not include any potentially negative part of the stress cycle.

is thus used to mediate this shortcoming, i.e. by applying the sign of the first stress invariant.

The calculation of principal stresses in 3D can be a relatively cumbersome process [1]; however they can also be determined from the eigenvalues of the stress tensor.

The principal stresses are defined by their algebraic magnitude, i.e.

This is probably the most commonly used fatigue effective stress and is therefore used as default. It is not fool-proof for multiaxial loading though, as discussed here.

, which is again defined by the angle to the local x-axis

and the inclination angle

The stress determination, cycle counting and damage accumulation is then carried out individually for each search plane, and the plane achieving the maximum damage is selected as the critical plane.

Resolving the amplitude or range of the normal stress is trivial using traditional cycle counting techniques both for constant and variable amplitude loading.

Similarly, the two shear stress components acting in the search plane is calculated as

In the most general case, i.e. non-proportional (out-of-phase) loading, the shear stress vector will describe some trajectory on the search plane, Fig. 4.1 (right). Resolving the shear stress range in this case is far from trivial and a multitude of techniques have been proposed for this purpose. Typically some geometric element is fitted to the trajectory, e.g. the longest chord, minimum circumscribed circle, maximum rectangular hull, etc., and the shear stress amplitude and mean is determined from here. Fatlab currently only supports the Longest Chord (LC) method.

A large number of damage parameters have been proposed in the literature, however only three is currently available in Fatlab;

The normal stress criterion is recommended only for brittle or semi-ductile components, e.g. spheroidal cast iron [8].

In case of uniaxial/proportional loading, the normal stress only criterion corresponds to the principal stress approach. In the case of non-proportional (out-of-phase) loading, however, the use of this criterion avoids the accumulation of damage in different directions.

for non-proportional. This criterion is rewritten to express a fatigue effective stress range

. The criterion is implemented in Fatlab using a critical plane approach, i.e. maximizing the above effective stress range around the surface normal. Currently, the criterion is only available for single cycle loads.

is the shear stress amplitude,

is the maximum normal stress occurring over a load cycle.

is an experimentally determined material factor describing the sensitivity to normal stress.

In its original formulation, infinite life was predicted if the damage parameter is below some experimentally determined threshold value

. The Findley criterion may be reformulated [2] in terms of an equivalent stress amplitude to be evaluated against the uniaxial fatigue resistance instead of

This is the formulation applied in Fatlab.

The reservoir counting algorithm is set as default and is recommended for short stress-time histories, because it will only produce full cycles, i.e. no half-cycles as is the case for the rainflow counting algorithm. The rainflow counting algorithm is considered the best choice for long stress-time series. In such cases, most half-cycles will be paired up, and the residual amount of half-cycles relative to the total number of cycles is insignificant.
Before any cycle counting, the stress-time history of the fatigue stress is searched for extremes, i.e. turning points. This list of extreme values is then fed through a racetrack filter order to eliminate stress ranges smaller than some threshold value. The threshold is given as a fraction of the maximum range and defaults to 0.05.
The reduced stress-time history (list of extreme values/turning points) is then used for cycle counting.
No binning of the stress ranges is done, i.e. all stress ranges are evaluated individually.

The stress-time history is then imagined to be filled with water and subsequently drained, one valley at the time, starting from the lowest one. Each draining procedure results in one full stress cycle and the stress-time history given in Fig 5.1 will thus be counted as 7 cycles. The mean stress value is also recorded for each cycle.

Fatlab includes two rainflow counting algorithms, denoted Rainflow half and Rainflow full. The first is developed by Nieslony [3] and available from the Matlab File-exchange. The latter is implemented after Amzallag et al. [9].

The rainflow counting algorithm by Nieslony [3] searches the stress-time history for half-cycles and pairs up opposing sets of these. In cases where half a stress cycle cannot be paired with an opposite half cycle, residual half cycles will occur as shown in Fig. 5.2. The handling of such residual half-cycles can be problematic; however in Fatlab they are treated as any other cycles just scaled by 0.5.

If the time series at hand is expected to repeat during the lifetime of the component under analysis, all half cycles will be closed eventually. In this case the Rainflow full algorithm is recommended, because it does not return any residual half cycles, i.e. they will all be closed.

The algorithm works by sequentially extracting cycles that are smaller than or equal to its neighbors, as illustrated in Fig. 5.3. After processing the entire timeseries this way, the residual cycles is duplicated and the process is repeated. This yields an extraction of full cycles corresponding to the residual and a new residual equal to the previous. 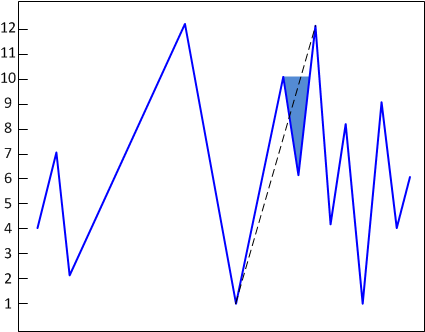 Fig. 5.3: Extraction of cycle in Rainflow full, after Amzallag [9].

If the load-time history defined by the user only contains one cycle, the cycle counting procedure can be bypassed using this option. Note that load histories covering less than one cycles is not supported.

Currently, shear stress based multiaxial criteria can only be used with single cycle loads in Fatlab.

The linear damage accumulation rule of Palmgren-Miner is implemented in Fatlab. Here the load spectrum is divided in to blocks of

load cycles of a given stress range

. The endurable number of cycles at this stress range is denoted

Failure is usually assumed when reaching a damage sum of

In order to take into account the bi-linear nature of SN curves, the calculation of the endurable number of cycles is calculated as

is the stress range at the knee point corrected for mean stress. The fatigue capacity

is also calculated for both parts of the SN curve (before/after knee).

Another issue that is overlooked by the linear damage accumulation is that stress ranges occurring towards the end of the service life is more damaging then in the beginning. Many more advanced damage accumulation principles have been proposed to remedy these shortcomings, however they typically rely on experimental parameters that are not available in an engineering context. Palmgren-Miner is therefore still the most widely used and recognized approach.

In addition to the damage D which is considered the primary result, several other values are calculated as described in the following.

The calculated endurable life assumes the same distribution of load cycles as in the applied loads.

refer to stress cycles before and after the knee point, respectively. The allowable damage sum is

by default, but can be changed under SN curve setup.

The equivalent stress range is calculated at the following numbers of cycles:

The utilization ratio (on stresses, rather than life) is calculated from

I.e. using the equivalent stress at the same number of cycles as the knee point of the SN curve.

[2] Bruun Ø.A. & Härkegård G., A comparative study of design code criteria for prediction of the fatigue limit under in-phase and out-of-phase tension–torsion cycles, Int. Journal of Fatigue (73), pp. 1-16, 2015.

This site uses Akismet to reduce spam. Learn how your comment data is processed.