This example shows how to run a bilinear analysis and include mean stresses from bolt pretension. The example model (red) is bolted to a larger welded component with a frictional contact in between. The model is loaded by to actuators, pinned in the origins of the coordinate systems shown below. The actuators can load the model both in tension and compression. 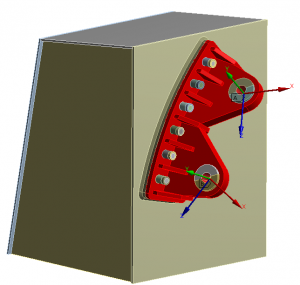 The non-linear model is solved in ANSYS with bolt pretension in load step 1 followed by 4 load steps with a “unit load” of 100kN in the x-direction of the two local coordinate systems. First in the negative direction, then in the positive, i.e.:

The “unit” load in this case is chosen as 100kN, instead of e.g. 1kN, because this is close to the mean value of the actual loading. Thus the friction and sliding in the model is representative.

During the export of FE stresses, the pretension must be subtracted from LS2-4. This is accomplished using LCOPER in the fatlab.mac APDL script:

The stresses due to the pretension (LS1) are also exported:

The pretension stresses do not cause any stress range, they only modify the mean stress. The associated load-time series should thus be a constant value of 1, as shown below in the loads file. 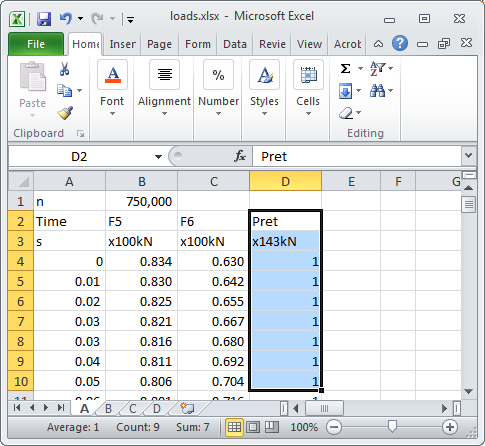 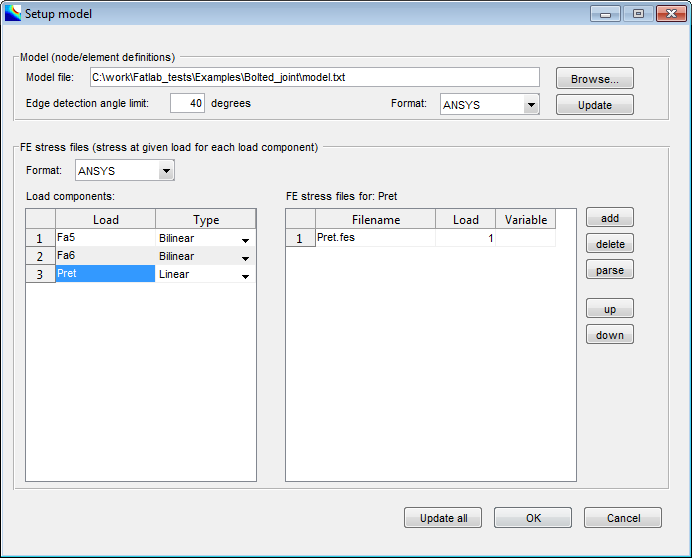 The FE stresses from the bi-linear loading of the actuators is included as shown below. Note that the order of the FE stress files should be monotonically increasing and that the Load variable should be set to the scale factor between the load time series (in the loads file) and the FE stresses, in this case -/+1. 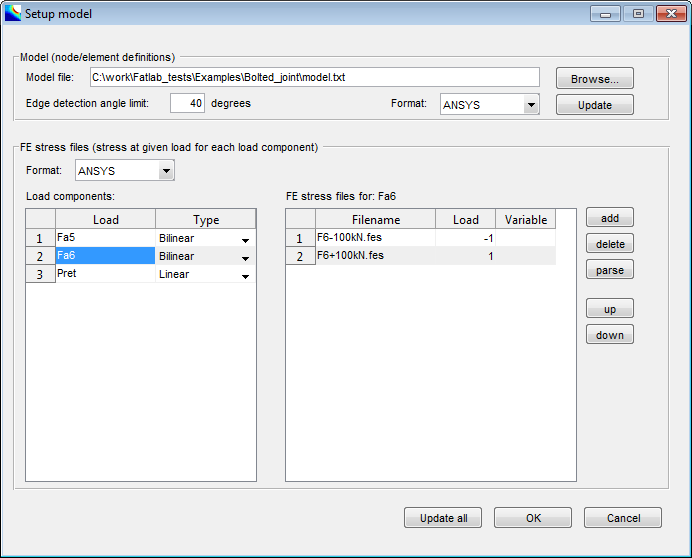 The bilinear stress response is shown below.

The resulting utilization is shown below. 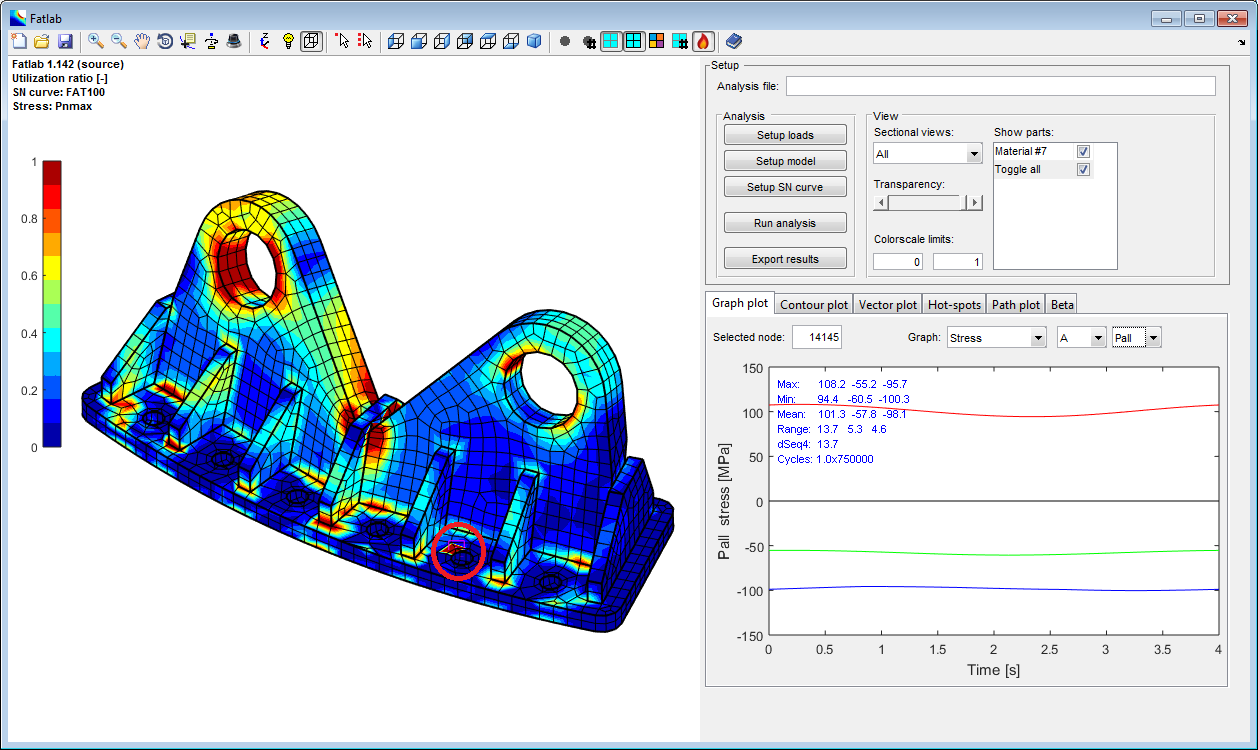 This example also exposes a weakness of using the numerically largest principal stress for a model subjected to non-proportional multiaxial loading. The encircled node (14145) is selected and the 3 principal stresses are shown to the right. It is clear, that the magnitude of P1 and P3 is almost identical. Thus when calculating Pnmax, it looks like the following, because, at t=1.7s, the magnitude of P3 becomes slightly larger than P1, and opposite at t=3.3s. This leads to a large range in stress and hence a large damage. 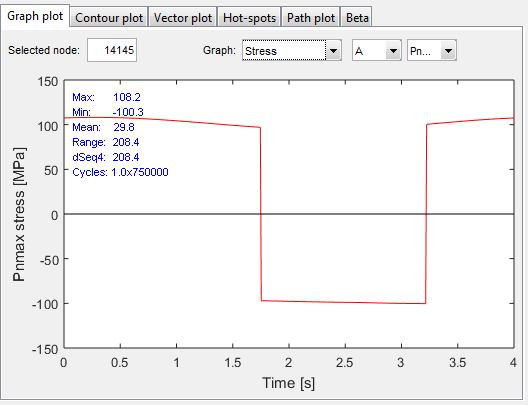 The problem is illustrated further below. The top pictures shows the typical uniaxial case, where the direction of P1 and P3 is interchanged between the minimum load and the maximum load, and the fatigue relevant stress range is found by subtraction of the two.

In the lower two pictures, on the other hand, the directions of P1 and P3 is not interchanged, but the dominant one switches between P1 and P3. In this case, it is not so clear how to determine the fatigue relevant stress range. 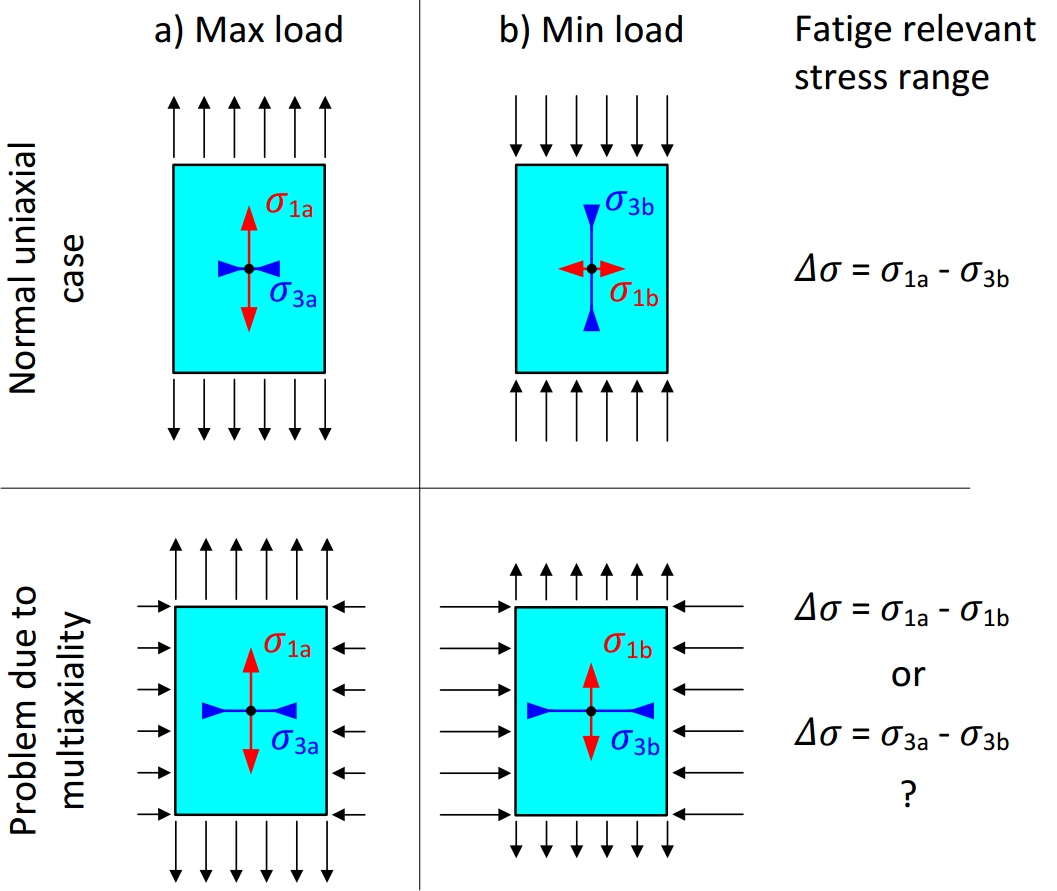